1 Corinthians 15:1-11
Now I would remind you, brothers, of the gospel I preached to you, which you received, in which you stand, 2 and by which you are being saved, if you hold fast to the word I preached to you—unless you believed in vain. 3 For I delivered to you as of first importance what I also received: that Christ died for our sins in accordance with the Scriptures, 4 that he was buried, that he was raised on the third day in accordance with the Scriptures, 5 and that he appeared to Cephas, then to the twelve. 6 Then he appeared to more than five hundred brothers at one time, most of whom are still alive, though some have fallen asleep. 7 Then he appeared to James, then to all the apostles. 8 Last of all, as to one untimely born, he appeared also to me. 9 For I am the least of the apostles, unworthy to be called an apostle, because I persecuted the church of God. 10 But by the grace of God I am what I am, and his grace toward me was not in vain. On the contrary, I worked harder than any of them, though it was not I, but the grace of God that is with me. 11 Whether then it was I or they, so we preach and so you believed.

“The gospel cannot be preached and heard enough, for it cannot be grasped well enough… Moreover, our greatest task is to keep you faithful to this article and to bequeath this treasure to you when we die.”
-Martin Luther

13 Follow the pattern of the sound words that you have heard from me, in the faith and love that are in Christ Jesus. 14 By the Holy Spirit who dwells within us, guard the good deposit entrusted to you.
-2 Timothy 1:13-14

For I decided to know nothing among you except Jesus Christ and him crucified.
-1 Corinthians 2:2

I do not understand the mystery of grace — only that it meets us where we are and does not leave us where it found us.
-Anne LaMott

“All around us we see Christians and churches relaxing their grasp on the gospel, fumbling it, and in danger of letting it drop from their hands altogether.”
-John Stott 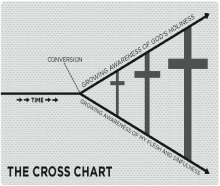 “When the devil throws our sins up to us and declares that we deserve death and hell, we ought to speak thus; ‘I admit that I deserve death and hell. What of it? Does this mean that I shall be sentenced to eternal damnation? By no means. For I know One who suffered and made satisfaction in my behalf. His name is Jesus Christ, the Son of God. Where he is, there shall I be also.”
-Martin Luther