If the Kingdom of God Is Here, How Can There Be So Much Evil in the World?

If the Kingdom of God Is Here, How Can There Be So Much Evil in the World?

Matthew 4:17
From that time Jesus began to preach, saying, “Repent, for the kingdom of heaven is at hand.”

Matthew 13:24–30, 36–43
He put another parable before them, saying, “The kingdom of heaven may be compared to a man who sowed good seed in his field, but while his men were sleeping, his enemy came and sowed weeds among the wheat and went away. So when the plants came up and bore grain, then the weeds appeared also. And the servants of the master of the house came and said to him, ‘Master, did you not sow good seed in your field? How then does it have weeds?’  He said to them, ‘An enemy has done this.’ So the servants said to him, ‘Then do you want us to go and gather them?’  But he said, ‘No, lest in gathering the weeds you root up the wheat along with them.  Let both grow together until the harvest, and at harvest time I will tell the reapers, “Gather the weeds first and bind them in bundles to be burned, but gather the wheat into my barn.”’”  Then he left the crowds and went into the house. And his disciples came to him, saying, “Explain to us the parable of the weeds of the field.”  He answered, “The one who sows the good seed is the Son of Man.  The field is the world, and the good seed is the sons of the kingdom. The weeds are the sons of the evil one, and the enemy who sowed them is the devil. The harvest is the end of the age, and the reapers are angels.  Just as the weeds are gathered and burned with fire, so will it be at the end of the age.  The Son of Man will send his angels, and they will gather out of his kingdom all causes of sin and all law-breakers,  and throw them into the fiery furnace. In that place there will be weeping and gnashing of teeth.  Then the righteous will shine like the sun in the kingdom of their Father. He who has ears, let him hear. 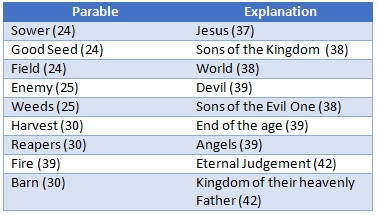 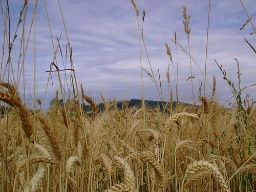 Matthew 13:41–42
The Son of Man will send his angels, and they will gather out of his kingdom all causes of sin and all law-breakers,  and throw them into the fiery furnace. In that place there will be weeping and gnashing of teeth.

Revelation 21:3–7
And I heard a loud voice from the throne saying, “Behold, the dwelling place of God is with man. He will dwell with them, and they will be his people, and God himself will be with them as their God. He will wipe away every tear from their eyes, and death shall be no more, neither shall there be mourning, nor crying, nor pain anymore, for the former things have passed away.” And he who was seated on the throne said, “Behold, I am making all things new.” Also he said, “Write this down, for these words are trustworthy and true.” And he said to me, “It is done! I am the Alpha and the Omega, the beginning and the end. To the thirsty I will give from the spring of the water of life without payment.  The one who conquers will have this heritage, and I will be his God and he will be my son.

Hell is a place of eternal, conscious torment for everyone who does not trust in Jesus Christ. Hell involves final separation from God’s mercy and from God’s people, unending experience of divine judgment, and just retribution for sin.
-Denny Burke

A measure of our own ongoing sinfulness is that we just don’t understand the beauty of God’s holiness, righteousness, and justice—and the equal ultimacy of these attributes with his love. But one day we will not have a problem with eternal punishment. It will make perfect sense…Since God does not delight in the death of the wicked, neither can we. Hell is both the vindication of God’s justice and the prerequisite for his creation’s restoration. But it is also a tragedy that will forever memorialize the horror of human rebellion.
-Michael Horton 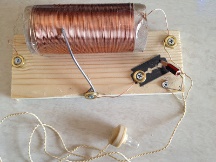