On the Way to Harmony 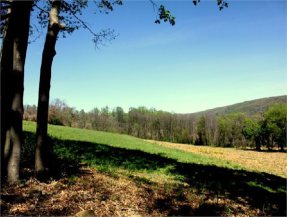 Driving to work one day recently, I noticed a sign proclaiming, “Harmony Township”. Sure enough, there is a place in rural NJ really called Harmony. The area is quite beautiful as you pass pastoral farmland and houses set back from the road with trees that seem to welcome you. I could believe that the people here really do live in harmony. What is there to fight about in a place like this?

And yet, in order to get to this place called “Harmony”, I have to travel on the death trap known as Route 22 through Allentown and Easton. In two weeks of commuting, I have seen at least five accidents complete with vehicle debris to be avoided. The highway seems to be one long work zone with varying posted speeds and I suppose people just aren’t paying attention. When an accident happens, traffic backs up and people don’t seem quite so harmonious.

Life is a lot like this. We all want to live in that beautiful state of harmony, but we often find ourselves in a traffic jam of conflicting opinions and impatience with whoever is in our way. How did we get here, where attacking another person’s perspective or their character is our first course of action? How did we decide that if someone belongs to another group, whatever it may be, they are wrong and worthy of our derision? What leads us to criticize first and ask questions later? I think it might be the same thing that causes so many automobile accidents – simply not paying attention.

Recently, I had a meal with a long-time friend I had not seen in a while.   For ten years, we had collaborated on a major music festival and loved hanging out during the year to plan and dream about the next event. I would have said that we were pretty close friends and that we knew a lot about each other.  Eventually, the festival closed and circumstances drew us apart. We wanted to hang out, but we were busy. So I was looking forward to seeing him and getting caught up. This time, though, I decided to make a point of listening more, asking better questions and not making assumptions.

I was astonished at what I learned. I already knew he was a talented engineer, where he went to school and that he was also a great musician. What I didn’t know was how much we actually had in common. He had gone to a boarding school that had prepared him well for college and so had I. He loved books and read widely. So do I. He was challenged by the reality of hitting middle age and so was I. And yet, we also have some differences. He is African American. I am not. He grew up in New York City and I grew up in the Caribbean.  Despite these obvious differences, our commonalities drew us together again. We laughed, commiserated and talked for a long time. I only wish I had arranged this meal a lot sooner.

Paying attention matters. Choosing to listen, asking good questions and not assuming the worst in someone else can change everything. Jesus did this pretty well and is a great role model. He noticed people that others ignored. He chose to go to places where he could learn about how people actually lived and worked.

As I drive to Harmony Township this week, I will be thinking about whom I need to call to ask out for a meal. I look forward to being astonished again.