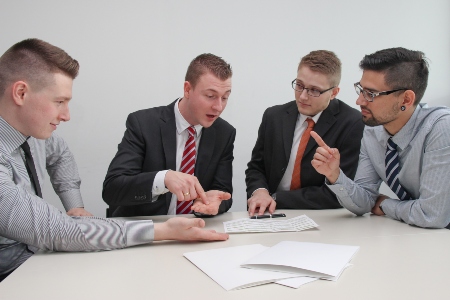 How many times have you heard someone say, “They say”?  Have you ever wondered who they are?  It seems that they have a lot of credibility, seeing how much weight we put on what they say!

As I reflect on the proverbial they, I notice that so often when I talk about problems in the world, I also tend to be reflecting on a similar group of people with a twist to the pronoun—I think about them.  Who are the bad drivers out there who don’t seem to know how to drive and make our roads unsafe?  Them.  Who are the parents who over-react at all of the referee’s calls at the youth soccer games? Them.  Who are the people I have been hearing about that land heatedly on one side of the Covid church/government reopening debate? Them. Or so I thought.  Until our staff meeting this week.

It actually reminds me a little bit of Jesus telling the story of the Prodigal Son.  I suspect that the Pharisees and scribes who were part of the audience as Jesus told the story were quite appalled at the younger brother as they listened to Jesus’ tale.  The prodigal had such audacity to disrespect his father and spurn his undeserving generosity.  I imagine they watched the group of tax collectors and sinners sitting at Jesus’ feet as the story unfolded and thought, “Clearly, we know who Jesus is calling out in this story!  It has to be them!” Imagine their surprise as Jesus brings the story to a close and it is in fact the self-righteous rule-following older brother who ultimately disrespects his father by spurning his undeserving generosity.  There must have been quite a stir when the story ended and Jesus’ look communicated what they were unwilling to hear, “You are them.”

Now, to be clear, in connecting the dots to our staff discussion, it is not wrong that I had a different opinion than my colleague.  In fact, that is healthy.  We tend to make much better decisions not because we all think the same way, but quite the opposite.  The greater danger is that when I discovered that everyone did not agree with me, my heart went into a defensive posture that began to determine that I had to make my point and win the argument.  I started to want to demand that everyone agree with me.  I started to see that I was not that different from those on social media fuming that others believed differently than they.

Anthony passed on an article in his weekly communication this week for us to read as we consider our heart posture while moving towards a reopening.  It is a good challenge for us to consider as we make plans to gather for worship again.  The author ends the post with an exhortation from Ephesians 4:1-3 “Walk in a manner worthy of the calling to which you have been called, with all humility and gentleness, with patience, bearing with one another in love, eager to maintain the unity of the Spirit in the bond of peace.”  Until two days ago I would have brushed past these words, generally glad that the calling to humility, gentleness, patience and unity was presented to those who are really struggling with a strong opinion about the reopening process.  Today, I read this passage with a newfound attention, because now I realize that I am them.