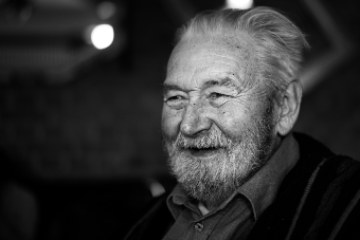 While in western Pennsylvania last Thanksgiving, I made a trip back to my hometown. Not the one where I did most of my growing up; the one before that where I lived the first three years of my life and visited often with my family because it was my Dad’s hometown. A new interstate highway makes it faster to get there, but off the exit ramp it looks much the same as I remembered.

It was not the town I went to see, though. It was my oldest cousin, Norm. In recent years, despite dementia which had been slowly stealing his mind, he still remembered me. Last year he even made the family connection and told the same silly story about my Dad, his uncle, at least a dozen times in an hour.

On another visit, we went to lunch at the sandwich shop where everybody knows his name—and how he likes his hamburger. Afterward, he directed me to drive by the church where both of us were baptized as infants. He wanted to show me a small memorial garden there dedicated to his parents.

The day before this past Thanksgiving, I spent the afternoon with Norm at the hospital where we both were born. Despite an infection, he was still friendly and welcoming, still repeating himself, singularly focused on getting back home. We talked about our ages, and when I mentioned that I had always looked up to him as a little kid, he said I made his day. We didn’t have any deep theological discussions, but when I mentioned heaven and Jesus, he smiled broadly. He was a simple working man with a simple faith.

On a Sunday afternoon two-and-a-half months later, Norm’s daughter called to tell me he had passed away that morning. I probably won’t go back to the old hometown again. Norm will be waiting for me in our new hometown. One day I’ll introduce you to him. You would like him.

“Now we know that if the earthly tent we live in is destroyed, we have a building from God, an eternal house in heaven, not built by human hands” (2 Corinthians 5:1).