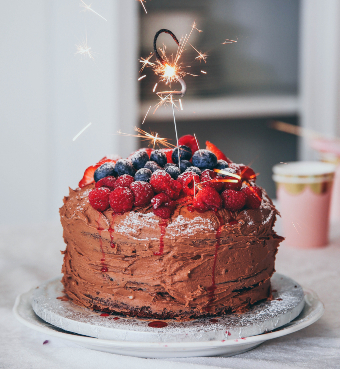 My birthday celebration was chaotic this year.  Not bad, mind you.  Just a little on the uncontrollable side.  Sunday, though not my birthday, was the only reasonable day to celebrate it in a family that is trying to get four households together in one place at one time.  But after worship in the morning at various churches, things got pretty ragged.  Debbie and I had been so busy the previous week that she had to run to the store for groceries.  Jon, our son, had either the flu or a bad cold and couldn’t come, which left his wife Shannon and our grandson Rowan trying to figure out what to do.  But they were troopers and decided to come anyway.

Meanwhile, back at church, the chair team was understaffed, so I stayed to help clear the “auditorium”/gym so that several dozen youth could make an early appearance for games that day.  Emma and Zach and Shannon and Rowan all arrived at our house before we did.  Rowan was toddling around, but also tired and hungry and so a little fussy – which is rare for him.  When we did get home, our other son, his wife and our other grandson, who live at a distance, “WhatsApp-ed” us.  So while we were busy trying to pat out hamburgers, start the charcoal, assemble salad and keep track of Rowan, we also took turns chatting with them.  Even Jon called to give birthday wishes from his sick bed.

I have to confess, I’ve grown more tolerant of chaos in my life where family is involved.  We had a great time: lots of food, laughter, cake, ice cream, funny cards and thoughtful gifts.  A ragged start hadn’t dampened spirits.  In the middle of the chaos, I couldn’t fight the feeling of thankfulness for all the Lord was providing.

By this time Rowan had recovered and was his usual happy self.  I took a break from the noise and picked him up and we walked outside in the sun.  He was content, and I’d like to believe he wanted some quiet time with his Opa.  From a neighbor’s yard, a crow started cawing and captured Rowan’s attention.  We watched as his body bobbed up and down when he cawed.  Rowan was trying to figure him out and sat in my arms fascinated.

And I was just watching him watch the crow.  I felt content and was aware that I was spending some quiet time with my heavenly Father at that moment.  We were all in good company right then.

I’m not very good at living in the moment most of the time.  I’m either obsessed with what has happened in the past or I’m contemplating what needs to be done next.  But perhaps the best birthday present that day was what wasn’t on my mind.  For that afternoon, the past and future were subservient to the present – and that was enough.

When the crowd cleared out, Debbie and I left the dishes and the pots and pans piled high in the kitchen and didn’t feel a twinge of guilt.  “We’ll get them on Monday.”