From Unbelief to Confidence

From Unbelief to Confidence

Acts 4:1–4
And as they were speaking to the people, the priests and the captain of the temple and the Sadducees came upon them, 2 greatly annoyed because they were teaching the people and proclaiming in Jesus the resurrection from the dead. 3 And they arrested them and put them in custody until the next day, for it was already evening. 4 But many of those who had heard the word believed, and the number of the men came to about five thousand. 5 On the next day their rulers and elders and scribes gathered together in Jerusalem, 6 with Annas the high priest and Caiaphas and John and Alexander, and all who were of the high-priestly family. 7 And when they had set them in the midst, they inquired, “By what power or by what name did you do this?” 8 Then Peter, filled with the Holy Spirit, said to them, “Rulers of the people and elders, 9 if we are being examined today concerning a good deed done to a crippled man, by what means this man has been healed, 10 let it be known to all of you and to all the people of Israel that by the name of Jesus Christ of Nazareth, whom you crucified, whom God raised from the dead—by him this man is standing before you well. 11 This Jesus is the stone that was rejected by you, the builders, which has become the cornerstone. 12 And there is salvation in no one else, for there is no other name under heaven given among men by which we must be saved.”

John 15:20-21
Remember the word that I said to you: ‘A servant is not greater than his master.’ If they persecuted me, they will also persecute you. If they kept my word, they will also keep yours. 21 But all these things they will do to you on account of my name, because they do not know him who sent me.

R.C. Sproul once said, “Perhaps the most difficult task for us to perform is to rely on God’s grace and god’s grace alone for our salvation. It is difficult for our pride to rest on grace. Grace is for other people – for beggars. We don’t want to live by a heavenly welfare system. We want to earn our own way and atone for our own sins. We like to think that we will go to heaven because we deserve to be there.”

2 Timothy 3:12
12 Indeed, all who desire to live a godly life in Christ Jesus will be persecuted…

Psalm 118:22
The stone that the builders rejected has become the cornerstone… 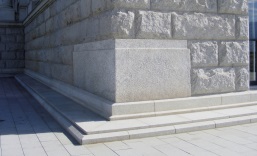 Acts 4:13–22
13 Now when they saw the boldness of Peter and John, and perceived that they were uneducated, common men, they were astonished. And they recognized that they had been with Jesus. 14 But seeing the man who was healed standing beside them, they had nothing to say in opposition. 15 But when they had commanded them to leave the council, they conferred with one another, 16 saying, “What shall we do with these men? For that a notable sign has been performed through them is evident to all the inhabitants of Jerusalem, and we cannot deny it. 17 But in order that it may spread no further among the people, let us warn them to speak no more to anyone in this name.” 18 So they called them and charged them not to speak or teach at all in the name of Jesus. 19 But Peter and John answered them, “Whether it is right in the sight of God to listen to you rather than to God, you must judge, 20 for we cannot but speak of what we have seen and heard.” 21 And when they had further threatened them, they let them go, finding no way to punish them, because of the people, for all were praising God for what had happened. 22 For the man on whom this sign of healing was performed was more than forty years old.

Hebrews 13:5-6
Keep your life free from love of money, and be content with what you have, for he has said, “I will never leave you nor forsake you.” 6 So we can confidently say, “The Lord is my helper; I will not fear; what can man do to me?”